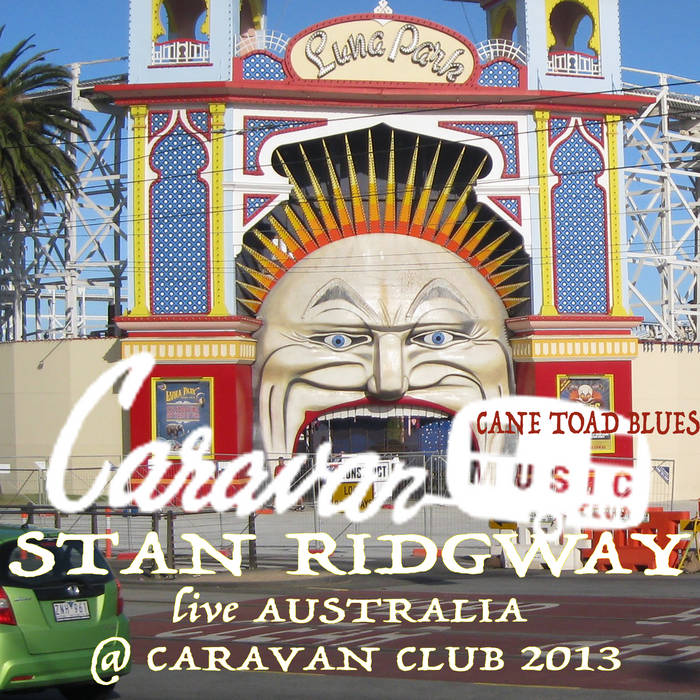 Full show. No breaks. Thanks to the Caravan Club Australia for their wonderful hospitality. And support of ARTS and MUSIC. Recorded in STEREO from the audience at full 44.1. Sound is great and no distortion. A proud, loud "You are there " Ridgway Historical Series release.

Stan Ridgeway In Concert at The Corner Hotel

Stan Ridgway comes from Barstow, a small town in eastern California. Few people would know much of Barstow, beyond its reference in the opening line of Hunter S Thompson’s Fear and Loathing in Las Vegas. Ridgway’s drawling delivery suggests he’s from Southern origins, maybe somewhere in the backblocks of Texas where everything is big, including the tales. Ridgway tells a story like the raconteur at a local bar delighting regular patrons and visitors alike.

Like Lou Reed, Ridgway doesn’t so much sing as speak in rough concert with the melodies of his guitar. It’s patronising, but not completely off the mark, to lump Ridgway in with the American storytelling tradition of Walt Whitman, Edgar Allen Poe and Jack London; in Ridgway’s case, however, his involvement as narrator is largely a convenience.

Ridgway was back in Australia tonight to ply his trade. A cursory check of his website suggests he spends the vast majority of his time on the road, having successfully transposed his art into a professional career. That professionalism is obvious in both his musicianship, and his comfort with the crowd – at one stage, Ridgway and his wife, keyboard player and accomplished artist in her own right, Pietra Wexstun, launch into an impromptu Antipodean-themed song to thank Ridgway’s local benefactors. It’s corny, and delivered with the dose of irony it’s often assumed (erroneously) that Americans lack.

Ridgway promises some older material, and some not-older material. The Wall of Voodoo material is particularly well received, most notably Mexican Radio, the song that first brought Ridgway’s distinctive atonal voice to commercial radio almost 30 years ago. Of his solo material, it’s the songs from 1986’s The Big Heat that strikes the strongest chord, including the title track,

Camouflage (which, in the context of the Vietnam War reflective zeitgeist that was 1987, stands above its competing cinematic efforts) and Just Drive She Said.  Wexstun gets her moment in the nocturnal stage sun with Take It Away; Calling Out To Carol and Peg and Pete And Me are, simply, great songs.

To the Maestro pays tribute to the influence of Ennio Morricone; Johnny Cash’s Ring of Fire is reinterpreted into a devilish narrative of a life lost to irreligious pursuits. The encore provides yet more joy, including Roadblock and Police Call. Stan and his band farewell the crowd and depart. Is Stan, is good.
BY PATRICK EMERY

"Listening to Stan Ridgway is always like a musical voyage. As he sings about "your presence in the sand" there's no wonder you'll see a Neon Mirage in the distance. With help from Dave Alvin, Pietra Wexstun, Ralph Carney, Rick King and the late Amy Farris, every lick, note and lyric is post-futuristic and brings to mind the world we're busy ripping apart now. Neon Mirage is without a doubt, Ridgway's strongest effort in years, and one that finds him saddled up and ready to ride with a world-wise bent into the sunset of the unknown - mirage or not. Challenging, interesting, and always highly entertaining. This particular well is long from drying up." ELMORE
"Ridgway's work is always passionate and completely compelling and Neon Mirage is no exception...Stan Ridgway at his quixotic best, telling jagged tales of modern life gone wrong with a casual urgency and a novelist's eye for detail, all set to a soundtrack that soaks up light in a beautiful darkness like polished ebony." CITY BEAT