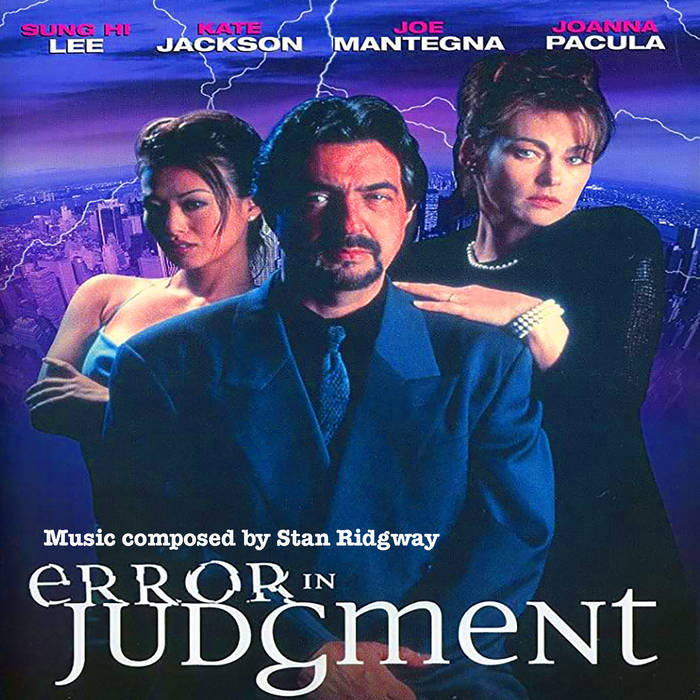 In 1999 Stan Ridgway composed and scored the soundtrack for the movie "Error In Judgment" starring Joe Mantegna, Kate Jackson, and Joanna Pacula. This Bandcamp release contains some of the primary film cues. People can check out and watch this artful and provocative mystery / thriller in its full version with all the music on various platforms as its still out there- now in a streaming internet world. Thank you folks! There soon will be other film scores released here by Stan Ridgway in the coming months as well. Please read on below for some film reviews of "Error In Judgment". Enjoy!

Eric (Mantegna) owns an art gallery, but business is bad. His psychiatrist wife (Pacula) tries to help her troubled husband. Then, in walks the beautiful, wild and gifted Toni (Lee) who brings success to the gallery-and turns their lives upside down! Are Eric and Toni having an affair? Thrust into a dark tunnel of deception and deceit, Liz hires a private detective to find out the truth. But the answer is more than she bargained for! Be there for the startling finish!" **** Film and Review

"Erics (Joe Mantegna) art gallery is losing money, and even though his psychiatrist wife wants to help, she cant do much to cheer him up. When a young, sexy woman named Toni (Sung Hi Lee) accepts a sales position at the gallery, she instantly brings it back to life, jump-starting Erics troubled marriage in the process. But the marital problems soon come back, prompting accusations that Eric is having an affair with Toni." - Review

"Joanna Pacula stars in this thriller as Liz, an analyst who introduces her husband, the owner of an art gallery, to an attractive female artist suffering from severe depression and thoughts of suicide. Before long, she begins to suspect that her husband may be having an affair with the painter, but after she hires a detective to keep tabs on them, Liz begins to suspect that infidelity may be the least of her problems -- her husband may be a murderer. Also stars Joe Mantegna and Kate Jackson." - Review