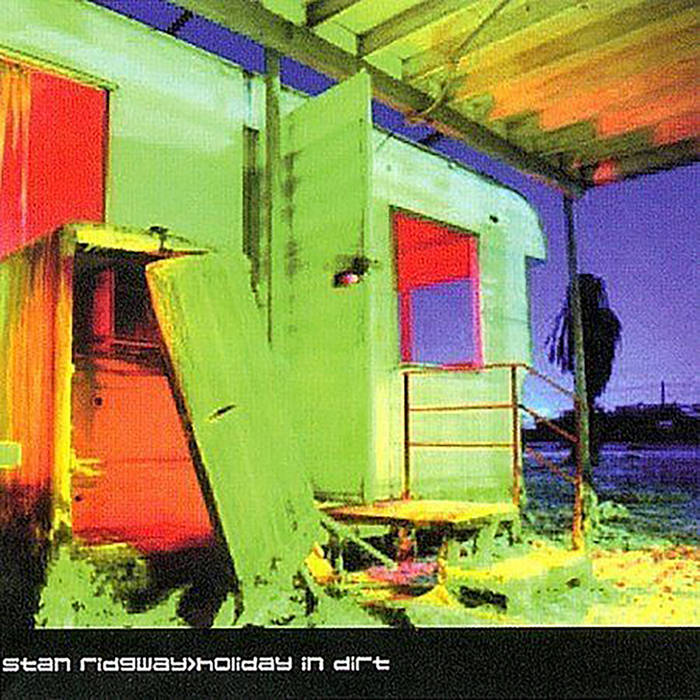 John Mentzer This collection is LOADED with great songs. This is mostly cut content from a few different albums, and a few rare one offs, but it sounds as good as anything!

Its effectively a great sampler of Stan's styles and moods. Some wacky, some sinister, cool, heartfelt, sometimes a little sad but always with a healthy dose of ingrained stoicism to take the edge off. Its infectious stuff and I'd say we could use it now more than ever! Favorite track: Operator Help Me.

A440 Records / www.stanridgway.com
All songs by Stan Ridgway
c & p dis information music bmi / A440 Records
+++++
Roaming a psychedelic no-man's land where Tom Waits and Jack Kerouac might converge, Stan Ridgway is an inimitable singer and precision essayist whose song characters wear life's grit under their fingernails. It's doubtful Ridgway ever broke the legs of a no-goodnik named Bing, but gosh darn if you're not thoroughly convinced of it by the end of "Bing Can't Walk," one of a handful of creaky, ramshackle gems gathered together on the odds-and-sods Holiday in Dirt. He may scribble outside the lines musically, but Ridgway's harp-goosed, art-rock vignettes are enormously detailed--witness the bloopy, futuristic "After the Storm," the eerily straight-faced midtempo rocker "Whatever Happened to You?" or the unlisted cover of Charlie Rich's "Behind Closed Doors," cheekily delivered in a character that might have been crafted by Bill Murray circa Caddyshack. Admittedly an acquired taste, Ridgway repays diligence with cartwheeling, consistently unexpected, possibly true parables sucked straight out of the twilight zone that is contemporary America. If Jackson Pollack paintings had sound, they'd probably sound a lot like this. KIM HUGHES -

Stan Ridgway is a songwriter. Now before that creates visions for you of some sad eyed coffee shop romeo acoustic guitar slinger, mournfully wailing about the loss of their favorite plaid shirt to a long lost girlfriend... realize first that Stan is nothing like that. More along the lines of Jimmy Webb, Mose Allison or Lee Hazlewood, or for that mater Bob Dylan, Tom Waits or Leonard Cohen. Of course it's best if you just think of him as Stan.
++++++
Ridgway is by no means a new name on the music scene. In Europe, you might have heard of him from his hits "Camouflage" or " Drive She Said" or in the U.S., the albums Mosquitoes or The Big Heat, frequently heralded has two of the greatest records of the 80's by lots of folks who get paid to say stuff like that.

Then of course, there was that band he started and sang with for several years. Evolving from a Hollywood Blvd. office dive “soundtrack company” for trashy. explotive drive - in flicks and sci-fi movies, Stan’s group sprang full blown from the punk days of the late seventies, all neo-nanderthal, Carl Orffian harmonies and electronics, married to twangy western guitars, and stories from the underbelly of America’s promise. One of their records “Call Of The West” produced a hit and an oft played MTV video about Mexico or somethin’... played to death some say. People still seem to like that Wall of…what? err.. something or other… I forget…anyway, let’s continue, shall we? That was then. This is now.

When you break it down to it's core level Stan is a storyteller and always has been. His songs read like movie plots. His characters are deep and developed, and of course they’re conflicted and have plenty of contradictions. There’s also an ironic element to these folks that Stan conjures up that seems to get missed by some. You probably wouldn't want to hang out with too many of them . Then again, pain loves company.

Stan Ridgway songs seem to hold almost a detective’s flashlight to the darker sides of human existence, hitting character’s flaws, and sympathies, but also their secret joys and compassions, and well,...the ambivalence and contradiction.

“My songs come from a folk and blues music tradition, and a country/ western place first, really,” he explains. “That’s where I got hooked on songwriting. The music came from all kinds of places. I’m a mess of eclectic things I grew up with and brought to what I do now. I grew up listening to Johnny Cash and Merle Haggard, Top 40 radio from the sixties, Bob Dylan, Joan Beaz, Howlin’ Wolf and Muddy Waters. There’s so many I could name that gave me the link to what a song could be. And I love that sound — that lonesome individual, telling his story with a guitar and a mike. A personal story. Telling a horrific tale over a simple, beautiful melody or a declaration of the self. There's a lot of horrific things in folk songs, and blues and country music. People get cut up, lovers kill each other, people get robbed and not with a gun but a with a fountain pen. It’s all a mask and metaphor sometimes for things the subconscious is sorting through. At least that’s the way I look at it. But it’s also entertaining and like a movie or a poem, and that’s the beauty of it.”

Ridgway gets compared to film noir, and Raymond Chandler, David Lynch and Orson Welles in particular. I'll grant you it's a fair comparison as far as setting and scene, and keying in on life’s little ironic tradedgies, but to leave it at that would be missing a part of what makes him such a unique player in the field.

Not only does he write extremely vivid character and story, but he uses the music itself to set the atmosphere.With a keen ear for color and mood, Stan creates musical settings so vivid that they’re tactile. Pop the CD in and a dry desert wind blows across your face, a long stretch of highway opens before you, or maybe a dark alley winds its way through the inner city — all painted with a broad pallet of styles. Listen to his catalog and you’ll pull out strains of jazz, folk, country, rock, and even hints of exotica. “It's all about setting the right tone and atmosphere to tell a story,” Stan explains. "There’s a lot of musical alchemy going on with what my ear goes for. Sometimes it’s setting a location, but other times it’s finding a sound that contradicts the story — maybe an uplifting sound that accompanies a murder. It’s about revealing and concealing, painting a picture and the devil is in the details.”

The new records is "Holiday in Dirt" . Well new record is a bit of a misnomer. Dirt is a superior collection of new, rare and unreleased materials that have amassed over the years, and more that a few in the last couple. Think of it as an anthology of short stories teemed to make it hang together tightly. A few of the tracks are from some soundtracks, others are European release B-Sides, but most are tracks that just didn't fit on one album or another.

But don't let that throw you. It provides us with some of Mr. Ridgway’s best work. Standout tracks like " My Beloved Movie Star", " Act of Faith" and "Operator Help Me " function more like a 3'30 musical novel, the kind you can't put down.

This year also marks the re-release of his standout 1995 record "Black Diamond". Released through a distribution company that went belly up soon after it's release, it made this gem near impossible to find. Now it’s out again and there are more stories from the America’s dark corners to haunt us.

Mr. Ridgway lives and works in Los Angeles with his wife and musical partner Pietra Wexstun, of the band Hecate’s Angels. Besides his work in popular music, he has also composed soundtracks for several films.
+++++

Stan Ridgway's lyrical voice is every bit as distinctive as the way he sings, and that's saying something -- the unmistakably dry but rubbery Southwestern twang of Ridgway's voice is the perfect instrument for his tales of lost souls and puzzled losers, and his songs chart a path that suggests a midway point between aural film noir and Ennio Morricone's spaghetti Western scores. A clearly underrated talent, Ridgway's post-Wall 0f Voodoo solo work has never attracted the audience it deserved (partly due to a long string of bad luck with record companies both large and small), but anyone who doubts the strength of the music he's been making since the late '80s only needs to give a listen to Holiday in Dirt, a collection of B-sides, rare tracks, and outtakes that have been gathering dust in Ridgway's closet. While odds-and-ends compilations like this are usually made up of stuff that didn't make the cut because it wasn't up to snuff, that's not the case with Holiday in Dirt -- as a matter of fact, this is as strong a set as anything Ridgway has released since Mosquitos in 1989. Whether he's writing about teenage guitar manglers ("Garage Band '69"), low-level mob leg-breakers ("Bing Can't Walk"), or a washed-up long-in-the-tooth actress ("Beloved Movie Star"), Ridgway makes his characters human and worthy of compassion even at their most ugly and pathetic, and the dry Southwestern clatter of the music is both bracing and the perfect fit. And even though these tracks were assembled from material recorded over the space of a dozen years,these 12 tunes (one appearing in two versions) fit together beautifully, which says a lot about the consistency of Ridgeway's vision. While Stan Ridgeway already has a strong career overview compilation (The Best of Stan Ridgway: Songs That Made This Country Great), Holiday in Dirt shows that he's left more than a few gems behind as well, and this album is a treat for fans and not a bad introduction to his body of work. ~ Mark Deming, All Music Guide
+++++
Though Stan Ridgway first made his mark in the early 1980s with new wave synth-rockers Wall of Voodoo (one of the most distinctive bands of their era), his subsequent solo career has continually shown that his talents extend far beyond his former band's lone hit (the semi-novelty "Mexican Radio"). Over the years Ridgway's recordings have marked him as a crafty songwriter with a gift for exploring the dark side of America via sardonic narratives that nod to Randy Newman and Donald Fagen. HOLIDAY IN DIRT is a collection of b-sides and other rarities from the extensive Ridgway oeuvre, but Ridgway's songwriting knack is such that none of these tunes feel like castoffs. As always, Ridgway's melodic invention transcends genre in an often-successful search for original-sounding, distinctive musical frameworks nevertheless bound to conventional rock hardware. Though his penchant for film-noir creepiness and his sui generis voice will strike a familiar chord with Wall of Voodoo admirers, this eclectic, ambitious batch of songs is as worthy a part of Ridgway's canon as any of his "proper" releases. - TOWER RECORDS
+++++
Like some troubadour of old, Stan Ridgway has bounced from label to label, never quite earning the widespread appreciation or recognition for his considerable talents. Perhaps that more than anything gives the songs on Holiday In Dirt such an authentic, well-worn feel. It's also reassuring to note that Ridgway always seems to surface again, and that's a comforting notion. Few contemporary artists do lonely as well as he does, while still leaving the listener feeling less alone. Tom Demalon
+++++
c & p A440 Records / stanridgway.com
dis information music bmi