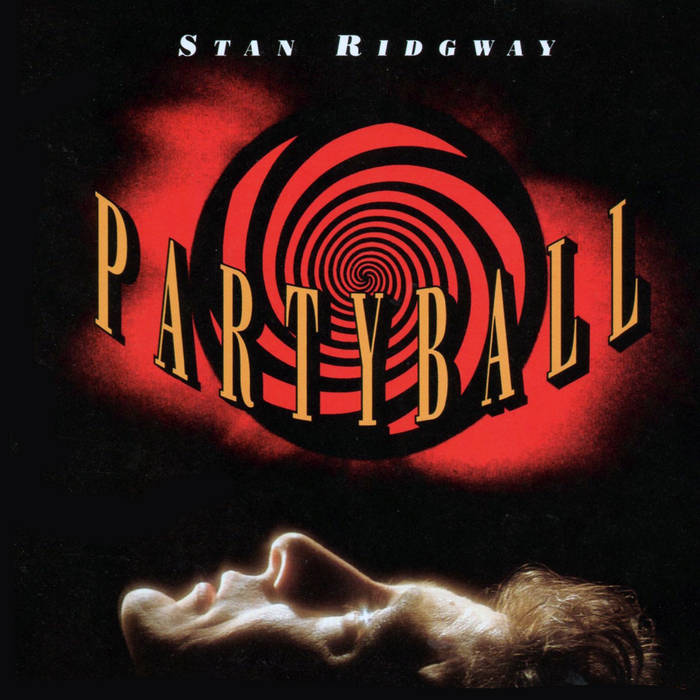 John Mentzer I love this album! It may not be the "best" Stan album, but its fully amped on manic weird juice and that's my brand!

Songs about alien overlords, weird guys with darting tongues, psycho killin mad cars, pop up fashion stores from another dimension... Its like a collage of all my favorite nightmare genres!

Some know him just as the long lost singer with the great Wall Of Voodoo, others as one of the great unsung maverick geniuses of our time. MELODY MAKER

"It was fitting that Stan Ridgway opened and closed his show at the Coach House with songs about beleaguered miners. After all, the characters who inhabit Ridgway's dimly lit musical world always seem to be getting the shaft.

He began Friday night with "Overlords," a futuristic sci-fi story that cast the Los Angeles rocker/role-player as a pressed laborer dreaming of escape and resistance against sinister galactic powers. A closing rendition of the fatalistic "Sixteen Tons," dedicated to the late Tennessee Ernie Ford, gave the show a fearful symmetry.

Ridgway's latest album, "Partyball," is mainly about the fearsome distortions that come from dominance, power and an unwillingness to acknowledge weakness and vulnerability as our common human lot. The newer songs often featured blunt, hammering beats--a departure from the unsettled, ambient, complex music that marked much of the Wall of Voodoo veteran's previous output.

New songs like "Jack Talked" and "Uba's House of Fashions" were good vehicles for the pliant-faced, mime-gesturing Ridgway to play characters driven daft. But they lacked the resonance of more detailed, closely drawn earlier songs that earned Ridgway deserved praise for bringing the eye of a dramatist or short story writer to rock lyrics.

Even when simplistic or allegorically fantastic, Ridgway's songs were thought-provoking sketches of how life is lived.- L.A. Times / Mike Boehm

“Ridgway describes Partyball as a "party record"; if so, it's a soirée no one in their right mind would want to be invited to. "Jack Talked (Like a Man on Fire)" is another tale of insanity and alienation, while the rest of the album serves up odes to trigger-happy cops, hopeless love, Harry Truman and the atom bomb, otherworldly chain gangs and plague-ridden dystopias, interrupted by odd instrumental interludes that continue Ridgway's fascination with soundtrack music for invisible movies.”- I'm A Loser Magazine/ Writer Unknown...

“I discovered this record back in the early nineties when I was listening to jazz and all sorts of things that had absolutely nothing to do with quirky songwriting. The video of "I wanna be a Boss" caught my attention, and I so decided to listen to the whole CD.Eventually this would become one of those very few albums that I would play obsessively for quite some time. I absolutely loved it, and it was with great fondness that I resurrected the tape from a box filled with college-era bric a brac after a whole decade- still sounds fabulous. I believe that I have seldom heard something as gripping as "The Roadblock," with that chilling line "looks like the boys at the roadblock shot the wrong the man"...Extraordinary and haunting story telling, with tremendous power. But the rest of the recording is also terrific, and very consistent. I don't find Partyball uneven in the least, as some other fans have complained. And like other reviewers, I am quite surprised that this album is not rated as highly as Ridgeway's other works. I thought Mosquitoes, which is also excellent, is in the same vein as Partyball, but that most of the other things that Ridgeway has recorded thereafter,and which I am now sampling on Amazon, do not have quite the same punch and immediacy as Partyball. I may be wrong on this--I probably need to listen with more care. Be that as it may, I consider this record a classic standing on its own in the entire production of recent songwriting. A must have, not just for Ridgway fans.” - Amazon UK

“This was the third album I bought recently by Stan Ridgway, who is best known as the lead vocalist for Wall Of Voodoo, who only released two albums with this band before departing and starting his solo career. Although "The Big Heat" and "Mosquitos" are both better, this one which followed the latter is worthy of being added to your collection and you will not be disappointed.” - Amazon UK

Stan Ridgway's third album, Partyball, expands on the formula of Mosquitos, offering eclectic, near-cinematic soundscapes and provocative, near-literary storys. Partyball doesn't quite have the focus or tunes Mosquitos, yet it has enough intriguing moments to make it worthwhile for any follower of his music. - All Music

“There are some words that describe certain artists' music down to a tee. The Fall are definitely shambolic. The Lightning Seeds are sugary. Yes are pretentious. Devo are barmy. And Stan Ridgway is cinematic.…at least that's the way it comes across to me. There's something sweeping and panoramic about his sound. Something hollow and empty as though his music is being recorded in a cave in one of those mesas or buttes in the middle of Monument Valley. It's obviously deliberate as Ridgway produces most of his albums himself and, when done well – and matched by the quality of the songs themselves – it is highly effective. "

"Roaming a psychedelic no-man's land where Tom Waits and Jack Kerouac might converge, Stan Ridgway is an inimitable singer and precision essayist whose song characters wear life's grit under their fingernails. It's doubtful Ridgway ever broke the legs of a no-goodnik named Bing, but gosh darn if you're not thoroughly convinced of it by the end of "Bing Can't Walk," one of a handful of creaky, ramshackle gems gathered together on the odds-and-sods Holiday in Dirt. He may scribble outside the lines musically, but Ridgway's harp-goosed, art-rock vignettes are enormously detailed--witness the bloopy, futuristic "After the Storm," the eerily straight-faced midtempo rocker "Whatever Happened to You?" or the unlisted cover of Charlie Rich's "Behind Closed Doors," cheekily delivered in a character that might have been crafted by Bill Murray circa Caddyshack. Admittedly an acquired taste, Ridgway repays diligence with cartwheeling, consistently unexpected, possibly true parables sucked straight out of the twilight zone that is contemporary America. If Jackson Pollack paintings had sound, they'd probably sound a lot like this. KIM HUGHES -
+++++
Like some troubadour of old, Stan Ridgway has bounced from label to label, never quite earning the widespread appreciation or recognition for his considerable talents. Perhaps that more than anything gives the songs on Holiday In Dirt such an authentic, well-worn feel. It's also reassuring to note that Ridgway always seems to surface again, and that's a comforting notion. Few contemporary artists do lonely as well as he does, while still leaving the listener feeling less alone.
+++++
c & p A440 Records / stanridgway.com
dis information music bmi