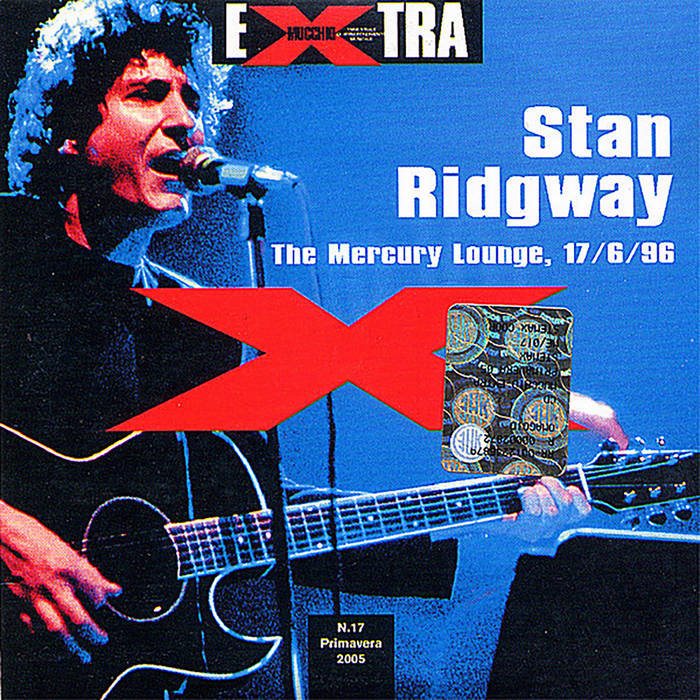 Stan Ridgway LIVE 1996 with his full band, in NYC @ the ultra cool Mercury Lounge. Classis stage banter. Songs from "Black Diamond", all the hits and more. An incredible knockout show in the Big Apple. The "Extra" release from Italy.

NYC - It was a dark and semi-stormy kind of night - a perfect Stan Ridgway kind of night. The wry Californian - former singer-songwriter for quirky new wave antiheroes Wall of Voodoo and solo artist in his own right for a decade-plus - took to a local stage for the first time this decade at the Mercury Lounge and he did not disappoint...unless you find story-songs about people who lead disappointing lives disappointing.

In two words: rock noir. Ridgway, who played with a crack backing quartet, took the crowd on a 75 minute sojourn through back alleys and twisted minds, where someone thinks he's "a little too smart for a big dumb town" and someone else is waiting for an ambush - "a bullet with my name on it." Pretty much everyone seems to live in "Lonely Town," where Ridgway sings of "wide open spaces...and empty rooms" and conjures up the musical equivalent of a "Red Rock West" or a contemporary "Bladerunner." Desolation boulevard.

Ridgway, 39, is the rare musician who speaks in cinematic terms, and we're not just talking about lyrical detail. The lonesome intertwined keyboard/guitar lines from Pietra Wexstun and Mark Schulz carry the same spooky, complex message - Joe Berardi's drums crash with authoritative, quasi-omnious punch and he set the tone with the opening song, "The Big Heat," a rolling, roiling song of shadowy behavior.

If you're gathering that Ridgway is an A - level ironist and Dylan-esque skeptic-disciple, you're in the ballpark. He did play Wall of Voodoo's mega-hit, "Mexican Radio," though he introduced it with "I've been drawing and quartering it, chopping it into little bits...but because I still like the damn song, I do it the way its supposed to be done." And he did. Twang, deadpan humour intact.

A country twang is important to Ridgway, though he is in no real way a country artist. It's a Johnny Cash thang - a heartfelt sourse he paid rhythmic/lyrical tribute to in "Luther Played Guitar," and explicitly in a spooky stittering version of Cash's classic "Ring of Fire."

Ridgway's song of "aspiration and dreams" was "Crystal Palace," a saloon song, where the singer reflects that "I feel lucky, I suppose, that we're still breathing - yeah, barely," and carries on to unearth some sort of triumph.

Ridgway has issued an excellent record, "Black Diamond," on his own label, with partner Joe Ramsey on the Birdcage label.

Stan Ridgway LIVE 1996 with his full band, in NYC @ the ultra cool Mercury Lounge. Classis stage banter. Songs from "Black Diamond", all the hits and more. An incredible knockout show in the Big Apple. The "Extra" release from Italy.