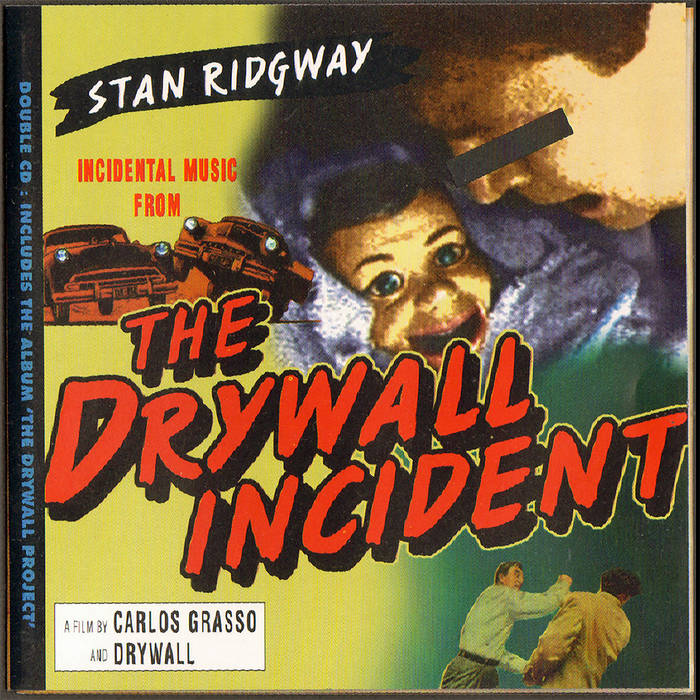 John Mentzer As it says in the description this album harkens back to some Wall of Voodoo sounds. It is definitely its own thing apart from the solo work with much darker themes and sound. Favorite track: Riot In Dogtown.

Not only is "The Drywall Incident" a great collection of wonderfully twisted songs that represents a sick homage to Los Angeles, it's easily the most experimental, unusual and therefore, most Wall Of Voodoo-like album Stan Ridgway has done since going solo in early 1986. Which isn't to say that it's some kind of cheap rip-off of his earlier work, but rather, to suggest that those who have always appreciated the more outlandish side of Ridgway - in and out of Wall Of Voodoo - will definitely be interested in this two CD set. The sound is superb! A whole lotta dirty, city gone mad, baby gone bad, filthy geetar-electronic blues! James Ellroy is listening!

The second installment in the "trilogy of apocalyptic documents" signals a radical departure in sound, miles away from the vividly tuneful and playful compositions of solo Ridgway and if anything, a return to the nightmarish tones of Wall of Voodoo and beyond. "The Drywall Incident" is a doulble CD that contains the soundtrack to the rare and famous film by director Carlos Grasso and Drywall.

The album rolls around gleefully in the wreckage and detritus of an increasingly insane American society; a place where 18 - wheelers hurtle down interstates strewn with the corpses of dead animals, where exclusive clubs cater for every perversion known to man , where grand theft auto is euphemistically justified as "takin' back America." An intense and fiery listen!

In this hoary and putrid world of pop music, filled with vapid
info-bytes, "controversial" web sites and loathsome singers who model
$12,000 pants for Details and then whine about media manipulation, Stan
Ridgway is a breath of fresh helium. Better yet, he's a cracked-spine,
jam-packed Norton Anthology of whacked-out American folklore and gritty
urban decay.

Though the one-time Wall Of Voodoo member has spent the better half of
his solo career spinning tales of kooks and losers from a mythical
America ("Salesman," "Peg And Pete And Me" and "Gumbo Man," to name but
an iota), his latest incarnation -- the band Drywall -- paints a bleak
yet still amusing noisescape of a Los Angeles about to blow. It's
eerie, outlandish and really quite wonderful. We'll get to it later.

This story starts off, however, over a year ago on a blustery,
freeze-your-nipples- off night in the old GE building in Toronto's west
end. Ridgway was in town filming his scene (a Punch and Judy style,
war-torn Berlin dance number set to "Cannon Song") in Larry Weinstein's
tribute to Kurt Weill, September Songs. Ridgway sat down for a very
brief interview and talked about his unceremonious dumping from Geffen
Records after his 1991 tour de force Partyball, and how people treat
Weill with far too much reverence. He was fascinating and droll as can
be as he sat there, nursing a hot toddy in one hand and holding a
ridiculous Colonel Klink helmet in the other. It all came to an abrupt
halt, though, after his about-to- pop-an-artery manager split us apart
just when things were getting good. The last thing I remember is him
ambling off to the washroom, sword dragging behind him.

Now, a year later and 13 years after Wall Of Voodoo's evocative Call
Of The West album, Ridgway is back with his original label (IRS) for
Work The Dumb Oracle, and back in a band -- Drywall is a tight, noisy
collective that includes Ridgway's longtime co-conspirator, keyboardist
Pietra Wextun, and drummer Ivan Knight. So why the leap from Stan
Ridgway™ pop tunes?

"It's because I was in limbo between record labels," Ridgway explains
from his Los Angeles studio. "I was working on recordings all the time
and finished up a solo record that I was just about to master and say,
`Here's another recording,' but in the meantime, I'd come up with a lot
of other things that were a lot angrier. I felt it had a lot more
resonance and meaningfulness for me -- this pile of angry rants -- than
what I'd just finished."

According to Ridgway, Work The Dumb Oracle is "the first in a trilogy
of apocalyptic documents culminating in the year 2000." If this sounds
a bit like plagues of frogs leaping out of the Book of Revelations,
you've got the right idea.

"That's why I kind of like it," he says with a laugh. "It's a bit
ironic 'cause I don't know if there's going to be an apocalypse. It
seems that history has a way of steam-rolling over all of us who think
we have the answer. But I'll tell ya, it's an age of marketing, and
Drywall understands that."

The anger which fueled Work The Dumb Oracle has more to do with what
Ridgway calls the `triangle heads of L.A. -- the kind of guy who "comes
down the street and throws a few spiked logs in the road for you to run
over" rather than the Newt Gingrichs or Bob Doles who want to scrap
Ridgway's beloved PBS to save a few tax dollars.

"A lot of L.A.'s population has become very myopic and very solipsistic
in terms that they don't really see what's going on in the rest of the
world. They feel it's all coming from here. They spew out pictures of
fires and earthquakes, riots and floods and O.J. -- all that stuff. We
thought L.A. was kind of an oracle of sorts, but it's a dumb oracle.
It's kind of a touchstone for a lot of people to get close to -- cop a
feel. But a lot of it's senseless nonsense.

"We thought Drywall is not above such base behavior, so we're working
the dumb oracle. And we'll work it for all it's worth, because we live
here and we have to take it day in and day out."