"Silly Songs For Kids" Vol. One 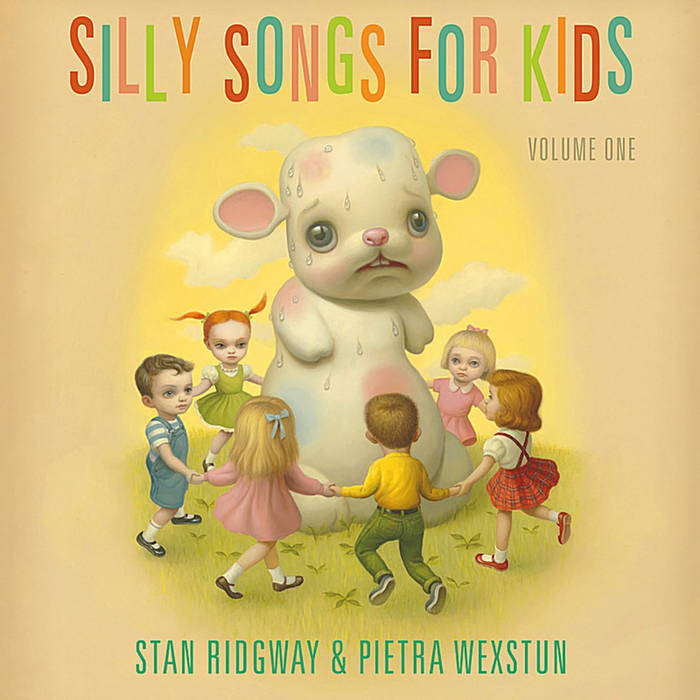 John Mentzer This might be the most sweetly twisted album I've ever heard! Its kinda like being trapped in a Max Fleischer fever nightmare... You know, in a good way! Favorite track: Mr. Moon Man.

" Silly Songs For Kids Vol. 1 " Now here at bandcamp and for a limited time? - pay what you want! We want you to hear it is all ! Thank you folks for supporting independent music. S & P www.stanridgway.com

"Silly Songs For Kids" Vol. 1 - For kids of all ages. 16 Songs. Stan Ridgway (Wall of Voodoo), & Pietra Wexstun (Hecate's Angels) throw a party with their funny, furry friends in a land of make-believe. Artwork by Mark Ryden. A magical, musical journey for the entire family to enjoy.

A friendly place where smiling fat green frogs sing songs with swarms of little buzzing flies in a land of make - believe. gee. It's FUN like you've never had! We promise.

Say Stan and Pietra, "With lots of of nieces and nephews around, we are always making up songs for them when we get together and well, things just happen. Childish and silly? We hope so. I guess you could say we are exploring a new frontier. This collection includes our friends Ralph Carney on horns, Rick King on the slide guitar and a few other folks, real and imagined, as well. And the cover is by our friend Mark Ryden. Hope you all enjoy singing along!"

Yes - A magical, musical place where talking tiny beetle bugs ride on the backs of happy backyard pixies. Where sad wooden dummies laugh out loud with soft and friendly dopey dogs. Where small cuddly spiders walk sideways smiling on blades of grass and then just go home to bed. Where... well - you get the idea. Fun and frolic for the entire family!

Along with Stan Ridgway on guitar, banjo, harmonica and vocals, and Pietra Wexstun on keyboards, autoharp and vocals are special guest musicians Ralph Carney on woodwinds and flutes (CarneyBall Johnson, Tom Waits), Rick King on slide guitar and bass ( Drywall, Bees vs. Moths), Lil' Beetle and Big Beetle on fiddle and vocals, Dr. Jackie Teak Lazar on sandpaper and complaints The album artwork is by Mark Ryden.

A cast of thousands! This is "Silly Songs For Kids - Volume One"! More to come so collect them all.

A Review from "Revenge of The 80's " website:
www.revengeofthe80sradio.com?p=302

" One of the world’s most original and creative musical couples recently introduced their newest album, and it is aimed at listeners who think Wall of Voodoo is something that Hecate’s Angels once used to decorate a Drywall Project. While one never knows what to expect from longtime musical partners Stan Ridgway and Peitra Wexstun, Silly Songs For Kids: Volume 1 may not have come from the proverbial “left field” as one might suppose; it was only recently that the vocalist/songwriter/multi-instrumentalist extraordinaire released a musically superb standards album: The Way I Feel Today (Crooning the Classics). Should children be deprived of what other generations are enjoying?

Established artists who sing tunes aimed at the younger set tend to mellow down their music, losing the very elements that endeared them to fans in the first place. The results of such works are inevitably hollow and offer the impression that the performer(s) in question are being sung down to. This kind of music is invariably accompanied by what it known as the “Disney keyboard sound” — the mellow safe electronic piano backup that we children of the 1980s had become all too familiar with thanks to songs like “Somewhere Out There” from the movie An American Tail, the vast majority of “boy-band ballads” and loads of Celine Dion songs. That kind of sound is not found on Silly Songs For Kids, Volume 1.

Ridgway and Wexstun take the approach that music directed to children can also be enjoyed and sung along to by adults while still charming the young ones. The duo lead off the CD with the impressively bluegrass/jug band reminiscent “Bring It On In the House.” Ridgway plucks away at the banjo as he sings the happy tune about taking a car ride to someone’s house. He and the rest of the band seem to be genuinely enjoying themselves even though they might have dropped their cake twice according to the lyrics. Ridgway, Wexstun and the rest of the band, which includes Drywall partner Rick King (slide guitar, bass), Ralph Carney (woodwinds) and the zany “Teak” Lazar (credited: sandpaper, complaints), treat youngsters to high quality but kid-friendly music that takes a cue from recent trends in family movies that purposely appeal to both adults and children alike.

Ridgway and Wexstum switch vocal parts in the quirky “Sing Along Song,” which could also be titled: ‘Fun With the Voice Synth and Ducky Impersonations,” “Mountain Top” and the strange-but-whimsical “Jackie’s Pixie Garden.” The latter two might inadvertently be interesting endorsements for breathing helium, but truly are geared to appeal to a child’s sense of wonder and fantasy. For another track, “Spider’s Web,” woodwinds master Ralph Carney ( CarneyBall Johnson, Tom Waits) is guest while Ridgway employs an eerie tone over a prominent bass, piano and muted trumpet arrangement reminiscent of 1920s jazz. After more tracks of fun on the 16 track CD, Ridgway sings the calming lullaby “Mr. Moon Man,” an ode to the Earth’s natural satellite on a cloudy evening The songs may be silly, but not campy and patronizing as much of today’s music for kids womds up becoming. Silly Songs For Kids, Volume 1 is ripe with the classic Ridgway sound and storytelling that his fans have coem to know as well as splendid musicianhip all around from him, Wextun and the band.

One should not be put off from listening to this album by its title. Though the CD is really aimed at children, this well-performed LP should ideally be considered more a masterpiece built for the next generation of Stan Ridgway fans. While parents would do well to have Silly Songs in their library, those without small children around will also enjoy this enchanted offering from Ridgway and Wexstun."